What is a cloud?

Let’s see what the cloud is.

Let’s take a closer look at what the cloud we think and think vaguely.

More and more, the trend is moving to the era when all server, storage, and network resources are used in the cloud. Just as the computer evolves as the times evolve, changes are taking place in the way that the computing devices used by the enterprise use them.

It is a natural phenomenon, as the housing environment changes from single-family housing to apartment, from an internal combustion engine to an electric car, and from a normal PC to a mobile environment, IT trends are changing with the times.

Since the beginning of 2000, H / W devices have been moved to the mode IDC (Internet Data Center) of servers in the company’s computer room.

Later in 2010, we began moving servers in IDC to the cloud.

It is an early move to the cloud now, but we are anticipating that the cloud will grow more and more.

For example, the price of an electric vehicle’s battery is the same over time as capacity increases and costs go down. The logic is that the cost of memory semiconductors goes up as the capacity goes up.

Now let’s see what the cloud is.

Cloud’s dictionary meaning is the cloud floating in the sky. Cloudy is cloudy weather with lots of clouds in the sky. So I do not know what the clouds are in the sky. 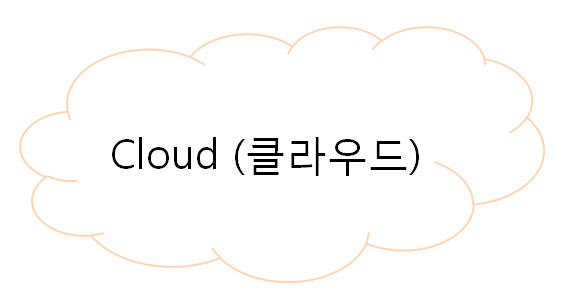 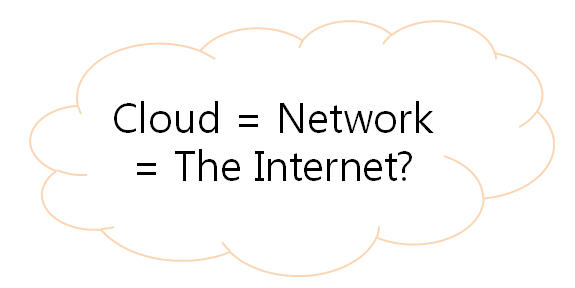 For example, each household has one car. However, there are many households in the house that are only used when going to the mart on the weekend. You can rent unused cars to lend them to those who need them and get paid as much as you borrow.

This type of business is Car Sharing, which is a typical Korean company. Uber is representative in overseas.

The cloud is what you pay for using and using your company’s servers, storage, network, and software with the same concepts as Korea’s SOCAR. 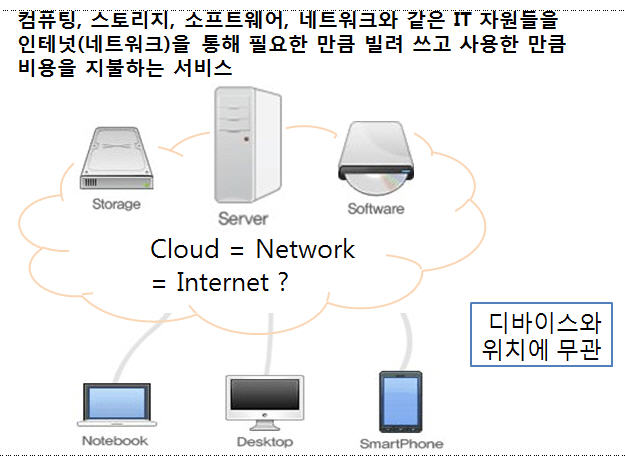 In another example, there was a well in every house in Yesterday (Chosun Dynasty). By the way, in the modern times, the government builds a water supply facility and uses water to pay the water charge every house. If you have a separate server for each company like this, the cloud is the cost of borrowing and using the server of the cloud company. 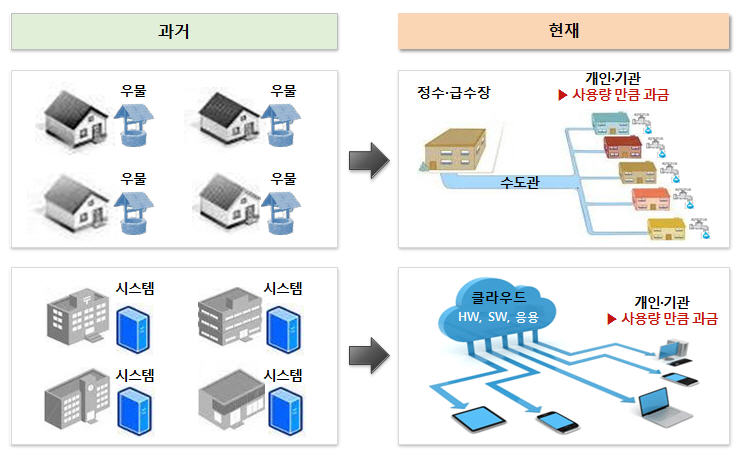 As computers have developed, there has been a change in the flow of time. From the point of view of a server using a computer as described below, the development of computers in the early United States has transformed the Mainfram into a client-server environment through the personal PC era. . Then, in the 2000s, mobile became popular and changed the computer to mobile environment. And in 2019, we are changing to a cloud environment. 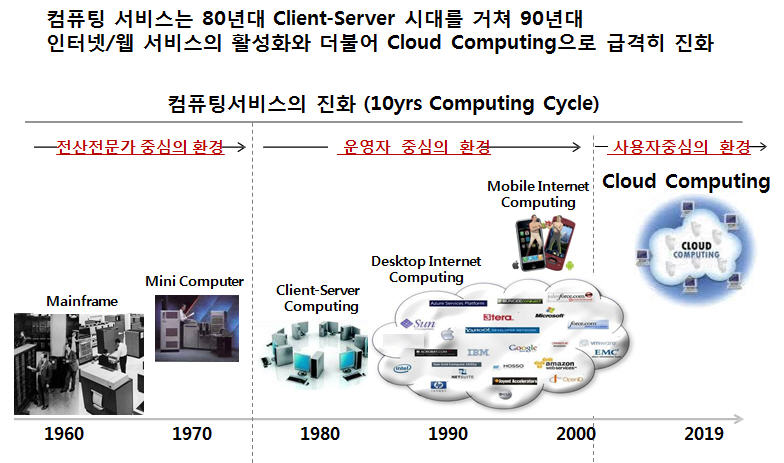 For example, if we live in exclusive jutek, thieves do not know when they come in and steal things, they are cold in winter and very hot in summer. However, when I live in an apartment, the security guard watches for 24 hours and runs the boiler at the bottom of the house. Similarly, putting services together in one place will reduce the cost of maintaining and maintaining.

The figure below shows how much time and money (compared to the cloud) will be spent on the initial investment when the company is building IT resources (server, storage, network, software) in the data center (IDC). 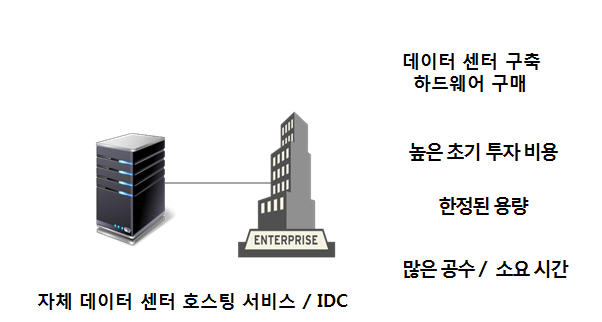 But when you switch to the cloud, you can use your hardware resources – servers, storage, and network equipment – immediately when you need them. And you pay as much as you use. In addition, CPU and memory capacity can be increased or decreased as needed. And the most important factor is that it takes little time to build. The server will be created with a few clicks. 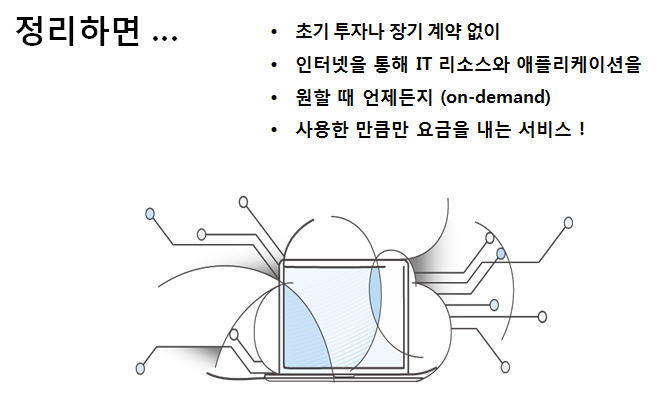 Below are some of the features of the cloud.

The traditional approach is to purchase hardware (servers, storage, network) when a company invests IT resources.

The cloud is a method provided by Amazon AWS, Microsoft Ezor, and Google Cloud.

To purchase an IT resource, a cloud server creates a server and storages in a few clicks through the Internet. And if you select the CPU, memory and disk capacity you need, server resources will be created as much as you want.

The server is charged for the number of CPU cores and time units (in minutes). So you pay as much as you borrow. 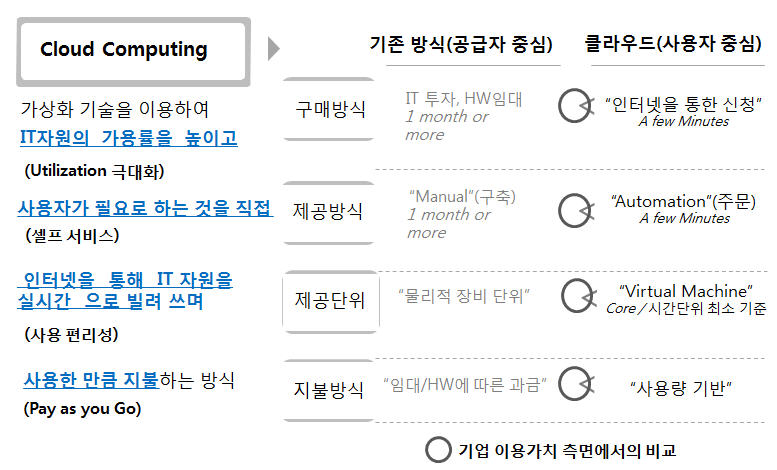 In general, there are two types of cloud computing. First,

The installation method is based on where the wood’s infrastructure is deployed and implemented.

There is a & quot; batch (development) model & quot; And what kind of cloud services are provided

There is a & quot; service model & quot;

Deployment (deployment) of the cloud model is made in four major. However, three deployment models can be applied to reality and are now divided into three (private, public, and hybrid cloud).

Let’s see what services are in the cloud. In other words, it is called the service model provided by the cloud. 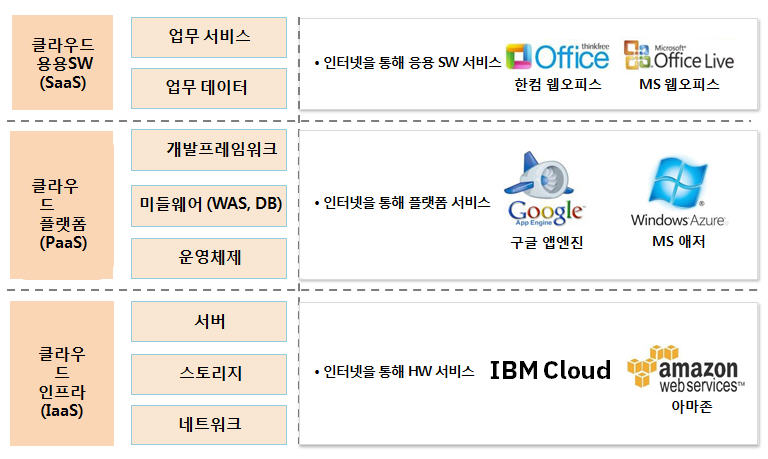 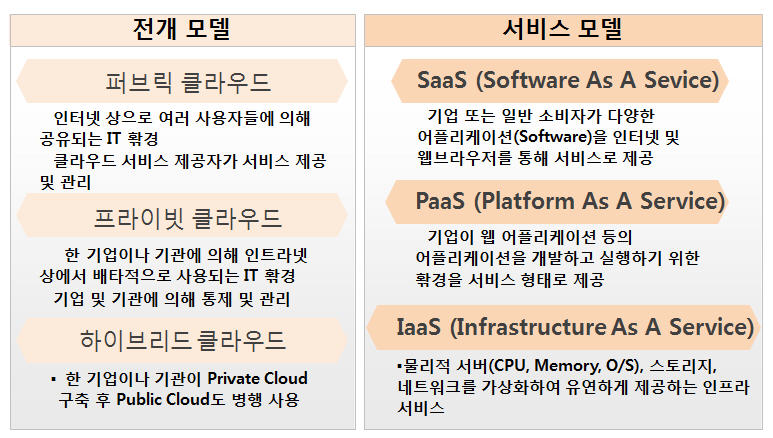 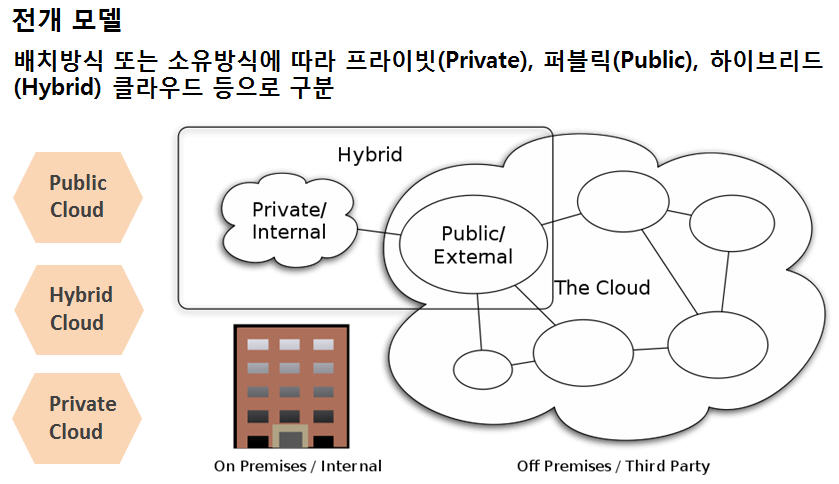 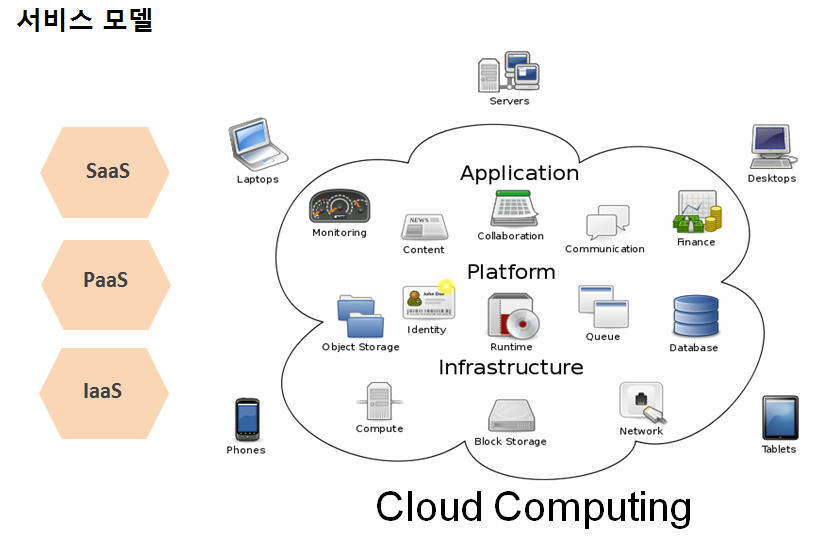 I will discuss some of the terms used in the cloud. We use technical terms to describe the cloud approach. The terms are divided into two major ways.

The second is the service model, which distinguishes between cloud service approach and cloud usage. That is, how users are classified based on how they use the cloud service. 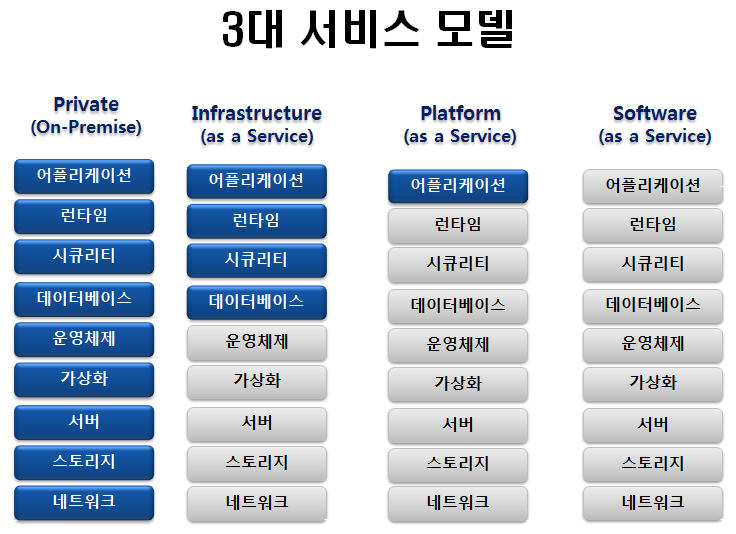 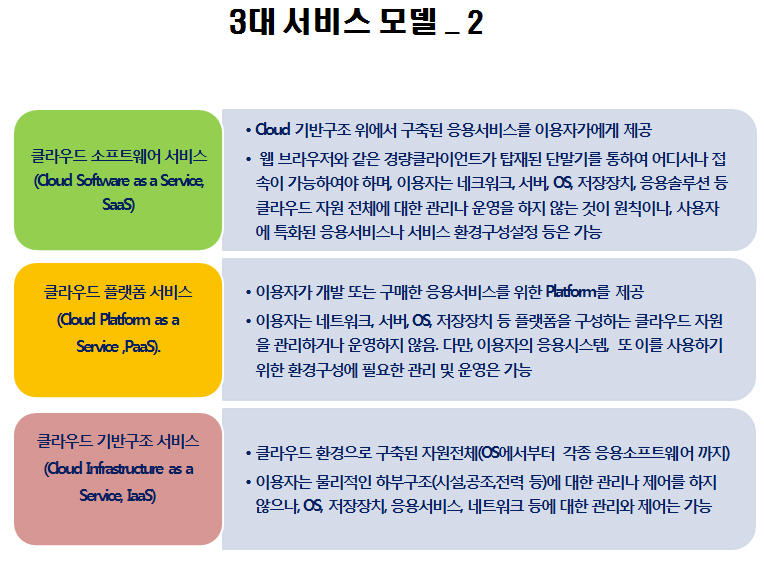 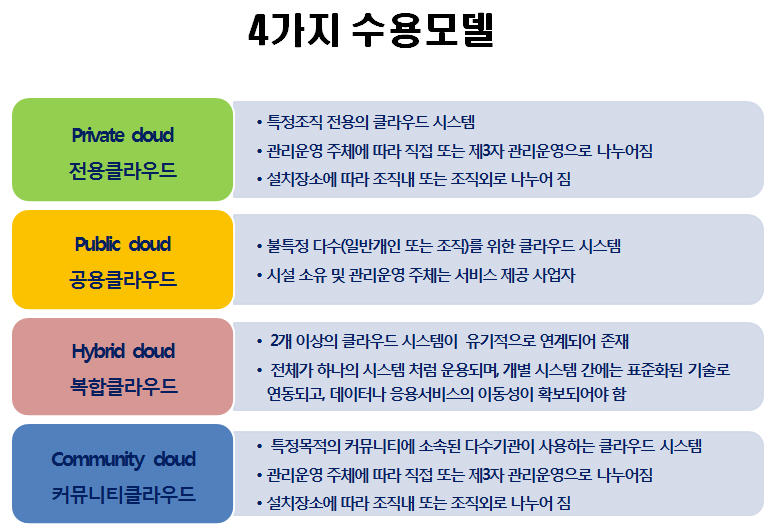 It is an easy-to-understand resource on what the user needs to manage (the consumer who uses the cloud) and the provider (the company that provides the cloud service) to the service model provided by Microsoft. 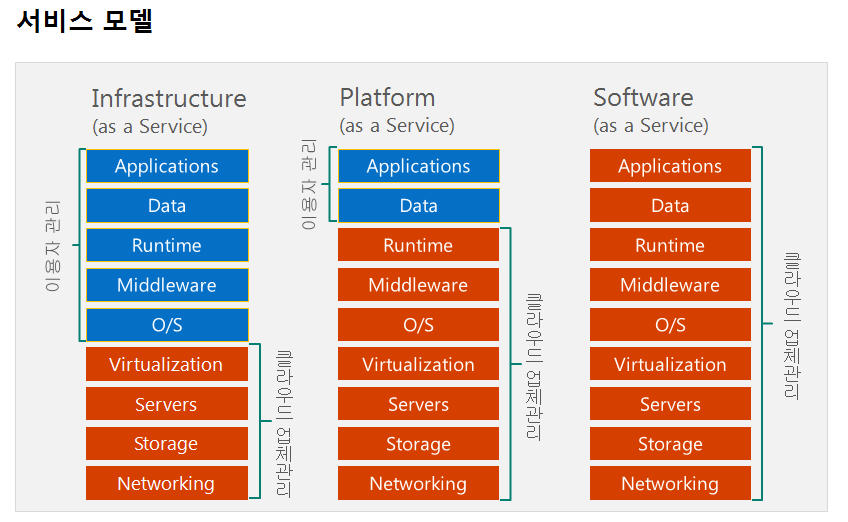 Here’s an example of SaaS, PaaS and SaaS.

It is a service that lends software, users do not have to prepare anything and only connect and use it. Users who use the service as a provider of the cloud providing all environments can use the service provided by simple connection.

Below is an excerpt from the article.

“We created the world’s first cloud-based CRM software (service-oriented software, SaaS) that provides a monthly fee. By storing vast amounts of customer data in the Salesforce cloud, companies can connect to the Internet through a variety of devices whenever and wherever they are needed. If you have only Internet connection, you can run and use SW immediately. You do not have to purchase or install SW separately.

SaaS is one of the many features of the software that allows users to use only the services they need. It is a concept that has fundamentally changed the way software is distributed. A software company can use one platform to provide services to multiple customers, and users can pay as much as they use. This approach significantly reduces the cost of having to purchase new software and reduces infrastructure investment and management burdens. “ 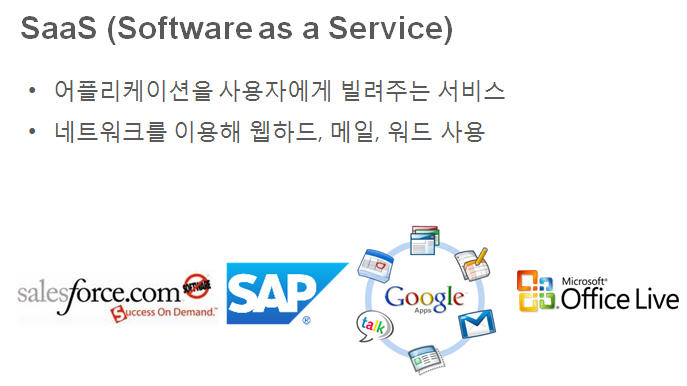 Platform offering is a form of cloud computing that allows users to develop, run, and manage business applications without having to build and maintain the infrastructure that is typically required for the software development process – a hosting environment for application development and testing Providing is one of the most common uses of PaaS. 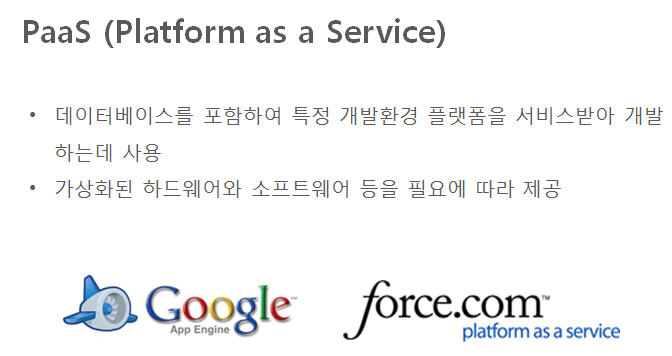 The case of PaaS is classified according to the use as follows.

Find business insights and patterns of behavior to make smarter decisions and predict the future more accurately, such as product market demand.

Business Process Management (BPM): Organizations can use PaaS to access BPM as a service, just like any other cloud element. BPM integrates the IT components required for process management, including data, business rules and service level agreements.

Communications: PaaS can also serve as a delivery mechanism for communication platforms. This allows developers to add communication capabilities such as voice, video, and messaging to their applications.

Database: A PaaS provider can provide services such as building and maintaining an organizational database. Market researcher Forrester Research defines the database PaaS as “a secure, scalable, on-demand, self-service database platform that can be used by developers and non-technical personnel to automate database provisioning and management.”

Things Internet: IoT is expected to be a big part of future PaaS use. It will support a wide range of application environments, programming languages ​​and tools to be used in various IoT deployments.

Master Data Management: Provides a single point of reference for data, encompassing processes, governance, policies, standards and tools for managing key business data owned by the enterprise. Such data may include reference data, such as information about customer transactions, and analysis data to support decision making

IT infrastructure is physical hardware (H / W) such as server, storage, and network. User installs and installs software on the server. 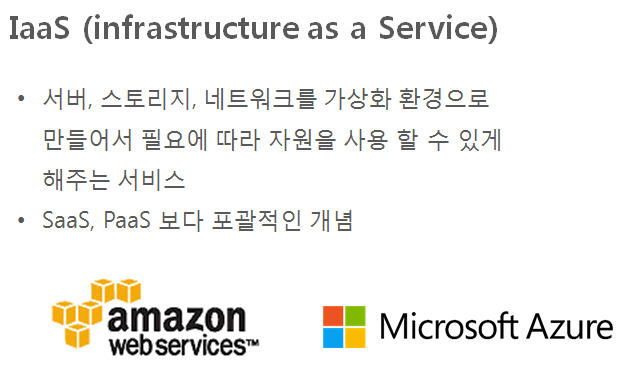 The current cloud, IaaS began to be used in Korea in Korea is a typical example, Amazon’s AWS EC2 service started in the cloud early in the market with high oil refining rate is equivalent to IaaS. If Amazon AWS takes control of the initial market and you are using IaaS as your current cloud service, then you should assume that most of them use IaaS.

The average user uses the cloud is mainly used for uploading and downloading photos from the mobile phone or laptop to the cloud. Using your work personally, you can put your Excel or PowerPoint in the crown and use the data from the cloud anytime, anywhere. 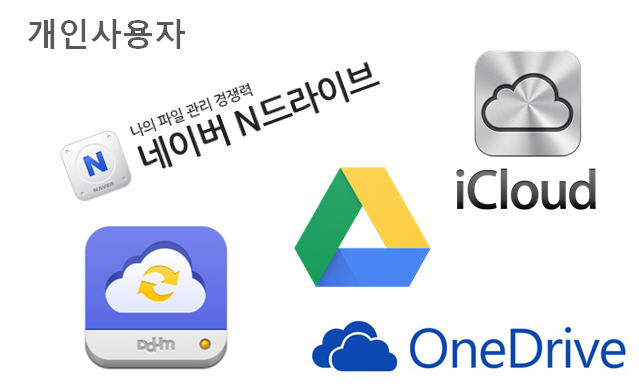 Now let’s look at how the cloud is being used and the market situation and future prospects. As the public market representing the cloud, the outlook is always bright. Just as everything is done 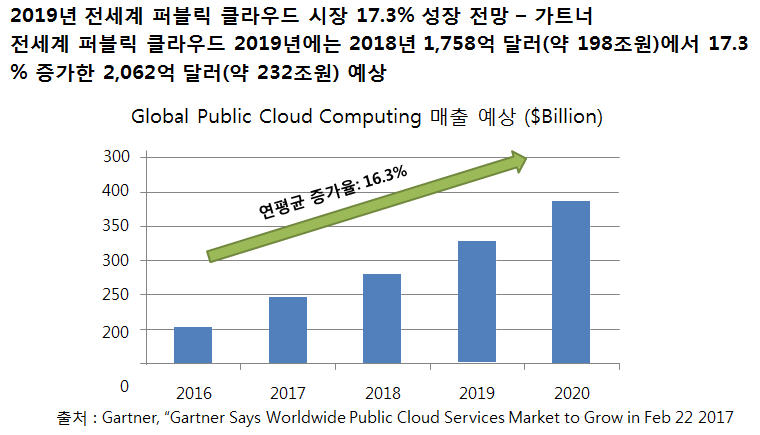 The world cloud market is dominated by the United States and Europe. Asia is still in its infancy, and it is expected that more and more markets will be formed in the future along with the global trend. 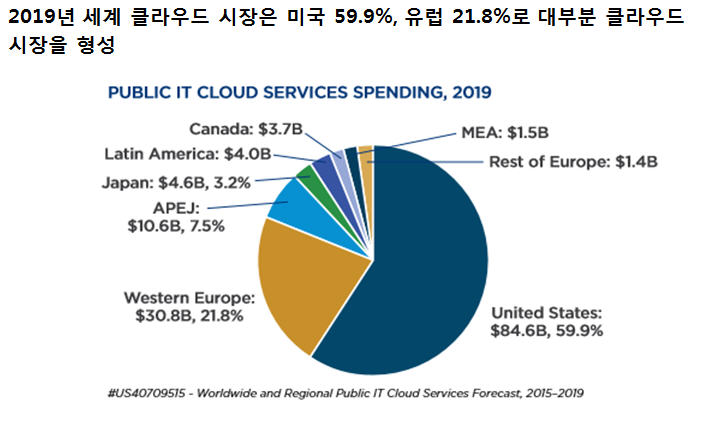 The chart below shows which cloud services take up a large share in the market that includes Korea. In Asia, IaaS and SaaS are dominant. 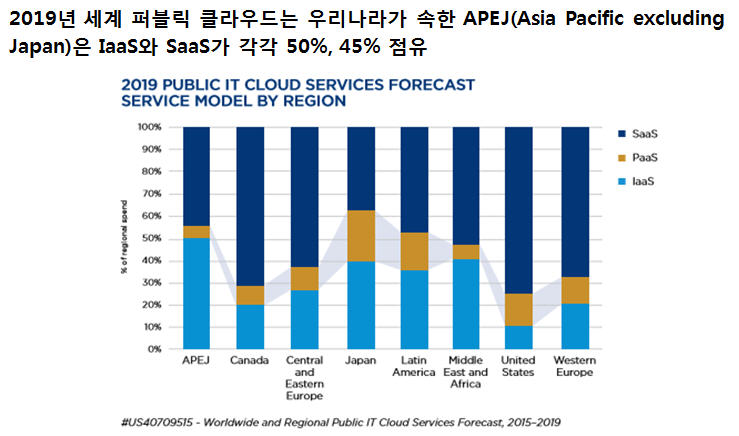 In the cloud, the IaaS market is dominated by Amazon AWS with a large market share, followed by Microsoft. 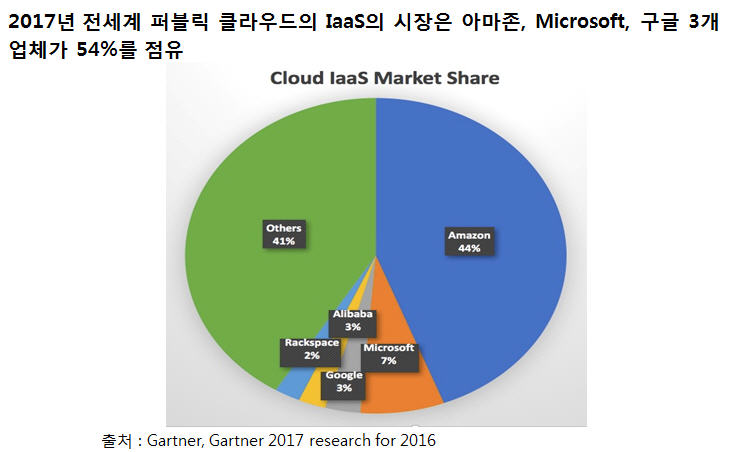 It ranked the first and second place of cloud companies in the global market. In the Asian market, Amazon is ranked first, and Alibaba of China is second, because of its market share. 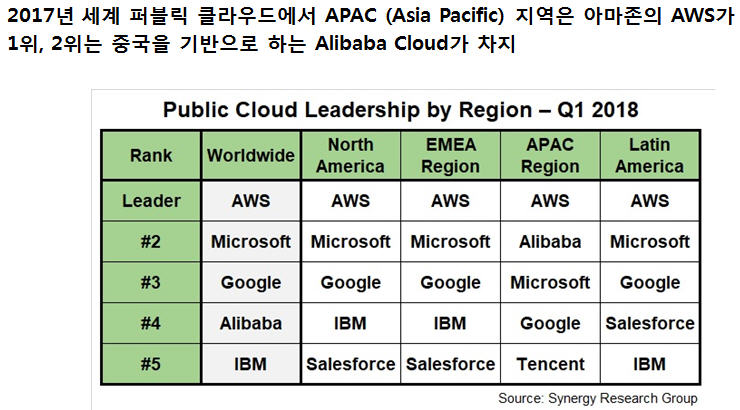 In the global public cloud market, representative US companies account for more than 50% of the total market. 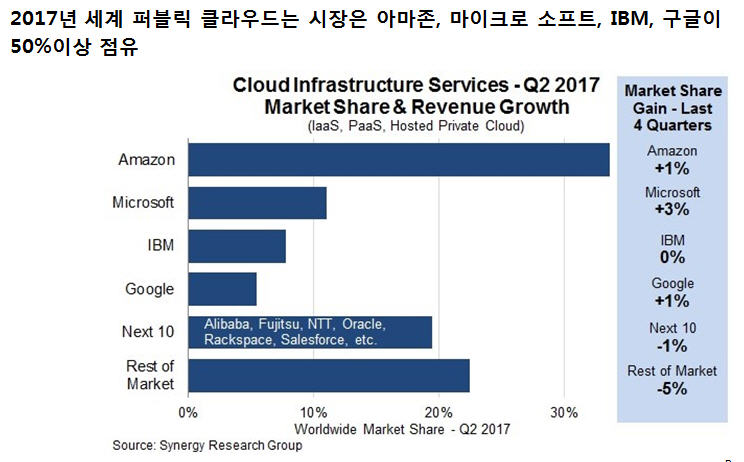 So far, I’ve learned what the cloud is and how it will grow in the future.

It is becoming more and more a case of transitioning from a company’s point of view to the actual cloud, and it is expected to become more and more cloudy. In the next section, we’ll look at what we should consider to switch to the cloud with SAP products, and how to make the transition.